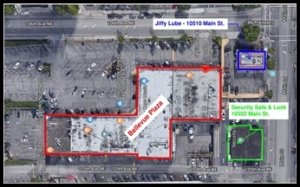 PacRim provided a pre-demolition Regulated Building Materials Survey in the mostly occupied mall encompassing multiple tenants with various ongoing retail and services operations working closely with the Property Manager (Wallace Properties). PacRim provided an abatement specification and budget which lead to competitive bids from responsive abatement contractors and our final bid analysis and award to Rhine Demolition. The abatement consisted of various Class 1 asbestos materials such as popcorn ceilings, wall textures and cement asbestos board. Class 2 asbestos materials abated where flooring and mastic along with window and roofing sealants. The fact that the buildings were occupied right up abatement prior to demolition presented some challenges. Evaluation of suspect materials was made and incorporated as alternate bid items. Ultimately these materials were investigated, tracked and either abated or eliminated from the scope. Again, as with most projects, PacRim provide the developer with a cost ROM that allowed and flexible but realistic working bid / contract pricing. This detail to tracking and documenting costs in real time during abatement eliminated delays and uncertainties for the developer.  This project, as large and complex as it was, did get completed on schedule and within the PacRim budget.

Extensive sampling, self-performed laboratory analysis of different materials encountered during destructive abatement keep the work moving to a successful conclusion. Additionally, having the abatement and demolition contractor being the same firm, while contracting abatement through the developer and demolition through the GC PacRim was able to efficiently managed the job and take this burden away from both the GC and the developer.

The combination of an experienced former contractor working at PacRim and an experience PM tracking costs and scope variations combined with a knowledgeable field technician provide the right formulae for controlled costs and executed performance on the project.

Connect with us on The Bluebook!

This website uses cookies to improve your experience while you navigate through the website. Out of these cookies, the cookies that are categorized as necessary are stored on your browser as they are essential for the working of basic functionalities of the website. We also use third-party cookies that help us analyze and understand how you use this website. These cookies will be stored in your browser only with your consent. You also have the option to opt-out of these cookies. But opting out of some of these cookies may have an effect on your browsing experience.
Necessary Always Enabled
Necessary cookies are absolutely essential for the website to function properly. This category only includes cookies that ensures basic functionalities and security features of the website. These cookies do not store any personal information.
Functional
Functional cookies help to perform certain functionalities like sharing the content of the website on social media platforms, collect feedbacks, and other third-party features.
Performance
Performance cookies are used to understand and analyze the key performance indexes of the website which helps in delivering a better user experience for the visitors.
Analytics
Analytical cookies are used to understand how visitors interact with the website. These cookies help provide information on metrics the number of visitors, bounce rate, traffic source, etc.
Advertisement
Advertisement cookies are used to provide visitors with relevant ads and marketing campaigns. These cookies track visitors across websites and collect information to provide customized ads.
Others
Other uncategorized cookies are those that are being analyzed and have not been classified into a category as yet.
SAVE & ACCEPT
Powered by