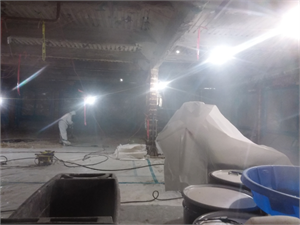 The project involved the complete demolition and abatement of the vacated floor. The entire below ceiling walls, flooring and mechanical systems were demolished, containment was constructed and the above ceiling demolition of mechanical systems and fireproofing were abated. The project was unique in that the ceiling is an open-air plenum that provides duct air to the floor above and had to be maintained during the abatement phase. PacRim provided cell phone monometer readings to GC, the abatement contractor and PacRim personnel and we were able to monitor the negative pressure during the entire course of the project and protect the tenants from any caused breaches in the containment.  The work was performed on schedule and within the budget with no additive abatement costs items. PacRim provided regulatory compliance and performed specification conformance oversight. Air monitoring was conducted in public areas and along side the abatement activities. Documentation in support of the owner’s guidelines and design were produced and maintained online during the project and weekly support and progress meetings were conducted remotely due the COVID-19 situation.

PacRim has developed and maintain a detailed O & M Plan for this building. The owner has been maintaining control of the asbestos on a day to day basis for the past seven years. PacRim performs scheduled periodic air monitoring, design specifications for TI on various floors and extensive documentation of regulatory compliance. PacRim has given the owner the tools and assurances that they are protecting their staff, the tenants and the public.

Connect with us on The Bluebook!

This website uses cookies to improve your experience while you navigate through the website. Out of these cookies, the cookies that are categorized as necessary are stored on your browser as they are essential for the working of basic functionalities of the website. We also use third-party cookies that help us analyze and understand how you use this website. These cookies will be stored in your browser only with your consent. You also have the option to opt-out of these cookies. But opting out of some of these cookies may have an effect on your browsing experience.
Necessary Always Enabled
Necessary cookies are absolutely essential for the website to function properly. This category only includes cookies that ensures basic functionalities and security features of the website. These cookies do not store any personal information.
Functional
Functional cookies help to perform certain functionalities like sharing the content of the website on social media platforms, collect feedbacks, and other third-party features.
Performance
Performance cookies are used to understand and analyze the key performance indexes of the website which helps in delivering a better user experience for the visitors.
Analytics
Analytical cookies are used to understand how visitors interact with the website. These cookies help provide information on metrics the number of visitors, bounce rate, traffic source, etc.
Advertisement
Advertisement cookies are used to provide visitors with relevant ads and marketing campaigns. These cookies track visitors across websites and collect information to provide customized ads.
Others
Other uncategorized cookies are those that are being analyzed and have not been classified into a category as yet.
SAVE & ACCEPT
Powered by